Sexuality and Paganism - Part 1: What Is Pagan Sexuality? 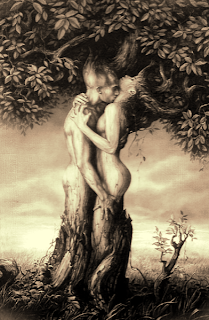 Most people who are new to Paganism or who have been raised outside the world of Paganism seem to think that wild orgies in the forests and drunken, drugged out sex parties are the norm for Pagans and Pagan Covens. People who come in to this world looking for that, are quickly disappointed! While Pagans do tend to be more sexually open minded than the average person it doesn't mean they lack sexual morals or that they can't or don't form long term relationships. Pagans are very tolerant of all forms of "alternative sexuality" but they are just as interested and as open to love as any other group...

One of the most common and most enduring myths surrounding Pagan women is the idea that they are all nymphomaniacs. While men are subjected to this myth as well, it tends to be less often than women, and are more often than not asked questions about how often they get to have sex with the "wild Pagan women" than they are faced with an equal stereotype.

Most Pagans were raised by non-Pagans and grew up in a sexually restrictive society, so they have to deal with all the same issues as non-Pagans. They also have to deal with the same concerns about safe sex, consensual sex, and appropriate sexual activity as everyone else in modern society. While the beliefs of a Pagan as an individual may be different from the society around them, they are still held by the same basic rules of society and most definitely the same laws as anyone else.

This is not to say that Pagans don't enjoy sex. They most certianly do! But the point is that while some Pagan Holidays celebrate sexuality, Paganism as a religion is NOT about sex! Should you ever come across a group or coven which requires sexual initiation or seems to have been formed so the leader can have sex with nubile young women, RUN FAST & FAR! This is NOT a legitimate Pagan group or coven...

Most Pagans were raised with a mix of conflicting sexual messages due to centuries of sexual oppression and negative sexual attitudes as well as more recent exploitative representations in the media.  Many grew up dealing with being told on one side that "Sex is Sinful" and on the other side that "Everyone is doing it." In more recent years this contradictory attitude has grown to include the teaching to "Respect everyone's sexual freedom" and to "Disprove of sexual activities outside the norm."  It's no wonder so many people grow up with warped views of sex and sexuality as a whole...

For the average Pagan, changing their thinking from what they were taught to a more tolerant view of sexuality isn't something difficult. But for others it can be a real obstacle. Unfortunately it's one that each must face in their own way, and I can not provide a real "how too" on the subject of handling. But I do suggest for those who face this issue to find someone to talk to, explore how they feel and why and to educate themselves on these alternative sexualities. You will find in general that within the Pagan community you'll encounter much less judgment and criticism and much more respect and tolerance when it comes to sexuality as a whole.

For most Pagans the Goddess plays an important role religiously. Due to this most Pagans find it easy to be respectful towards women. It also helps that most Pagan men were either a part of the 1970's feminist movement, were raised by parents who at least respected it's goals or have grown up in the world since that movement's influence has taken hold.

Sex CAN be a sacred act. It's important to understand the gods wish for you to enjoy your sexual nature, they don't want you to put yourself or others in danger by doing so. Nor do they want for you to do something you are not comfortable with simply because others are doing so. It's important to understand your own comfort levels and know and respect the risks involved with any sexual activity. If you respect your own limits and comfort levels, others will as well.

As a rule any activity which causes no harm, whether alternative or not, it tolerated (accepted without judgment). Pagans understand that just because you might not be drawn to a certain sexual activities doesn't mean you are wrong or immoral. At the same time, it's not expected that simply because you are Pagan that you have to experiment with you own sexuality. Again, it's about knowing and respecting you!

As with every other facet of Pagan life, you'll find that every type of lifestyle and belief is and can be included within the Pagan community about sexuality. At the base of the issue is the belief that sex is not something which is or was ever meant to be coveted or hidden... Sex is not dirty, it's not sinful, it's not dangerous. Instead sexuality is something which should be enjoyed and embraced in how ever manner YOU are comfortable with. IF you are open to alternative sexual experimentation, it's okay! If you're not, that's okay too! However as a Pagan you need to be prepared to encounter people from all sexual walks of life and understand that they not only expect, but deserve the same tolerance of their lifestyle as you do of yours.
3 comments:

What to Read? Reading By Author: Scott Cunningham

The first "What to Read" segment was solely for "Beginner Books" and came from all different authors and sources... For the next few installments I am going to focus on just ONE author at a time. Many Pagan Authors have their own following of fans who just love their writing style and knowledge. I can't tell you which authors YOU will love, but these lists will hopefully help you to find a favorite or just build your library.

Scott Cunningham was first introduced to the Occult and Pagan world of Covens through a highschool friend. She also introduced him to Wicca, and helped him to start his training. He studied creative writing at San Diego State University, where he enrolled in 1978. After two years in the program, however, he had more published works than several of his professors, and dropped out of the university to write full time. During this period he had as a roommate magical author Donald Michael Kraig and often socialized with witchcraft author Raymond Buckland. In 1980 Cunningham began initiate training under Raven Grimassi and remained as a first-degree initiate until 1982 when he left the tradition in favor of a self-styled form of Wicca.

In 1983, Scott Cunningham was diagnosed with lymphoma, which he successfully battled. In 1990, while on a speaking tour in Massachusetts, he suddenly fell ill and was diagnosed with AIDS-related cryptococcal meningitis. He suffered from several infections and died in March 1993. He was 36.

His most widely known book, and by far most popular is Wicca: A Guide for the Solitary Practitioner

which includes his personal book of shadows. Originally published in 1988, this Guide has helped hundreds of thousands of new Wiccans discover their paths and become comfortable within their new lives... However, it's highly recommended for anyone interested in or following a Pagan Path as just a good guide which is easily altered to fit the personal beliefs of the reader...

Below you will find a full list of writings by Scott Cunningham...

1987 - The Magical Household: Spells & Rituals for the Home

1988 - The Truth About Witchcraft Today

1988 - Wicca: A Guide for the Solitary Practitioner

1989 - The Complete Book of Incense, Oils and Brews

1989 - Magical Aromatherapy: The Power of Scent

1993 - Cunningham's Encyclopedia of Wicca in the Kitchen

1993 - Divination for Beginners: Reading the Past, Present & Future

1993 - Living Wicca: A Further Guide for the Solitary Practitioner

2009 - Cunningham's Book of Shadows: The Path of An American Traditionalist

Below you'll find a few "Reader Reviews" and "Reader Ratings" so that you can see what actual readers think... If you have read any of the writings of Scott Cunningham and would be willing to share your feelings, please post them below in our comments area!

"Ive read his book about herbs....I really like it, its a good reference book.  Ive also read his book about Wicca:Guide to the Solitary Practitioner.  Its what opened my eyes to what Wicca was about so Id give it a solid 4 out of 5 stars."  -  Amaranth361 (via CafeMom)

"Wicca in the Kitchen (encyclopedia of) by Scott Cunningham is a book I refer to often. I would give it 5 stars as a reference book. It has very little magical instruction though so if that is what you are after I would recommend looking elsewhere. That said I love this book and keep it on hand in my kitchen at all times. It lists the magical and healing  properties of almost all imaginable foods. I turn to it when I want to prepare myself a dish that will give me extra "oomph" in my magical desires. It is also a great reference for preparing festival (or other symbolic foods). If you enjoy food, cooking, and magic then there is no way you could not love this book."  -  Teralita (via CafeMom)

"I'd recommend them all because they're easy to read and not intimidating at all for newcomers.  My favorite is Incense, Oils, and Brews because it was my first spell book and focused on my favorite things."  -  Sherriet (via CafeMom)

"I have a lot (trying to get all) of his books. I love them all so far and would recommend them to everyone."  -  Pixie92 (via CafeMom)

"I have read and own "The magical household: spells & rituals for the home."
It has has things on old timey house lore, and the chapters are: the hearth, thresholds of power, furnishings, dreaming, stove and spoon, bathing and brushing, the indoor garden, fur,fins, and feathers, the mystic garden, the garage, protection, by broom and rag, household purifications, moving, the magical year, house spells, household omens and portents, & the household altar. And it just gives you really great info in every chapter. and covers every section of the house. i think one of my favorite sections are the "by broom and rag" section. its about how cleaning the home is a ritual itself :). i also like the "moving" section, very kool stuff in there.  I would give this book 5 stars lol. :)"  -  Pinkdragonsegg (via CafeMom)

1. There is more than one God and Goddess....do not honor one above another, and respect each individual's right to honor the God or Goddesses of their choice.

2. All things are created equal, and each thing is created in an image of the All.

3. Do no speak ill of the Gods, for each thing that happens happens for a purpose or reason that we may not yet be privy to.

4.  Keep your holy days sacred. Whichever of the holy days you chose to observe, follow them in your own way and preserve their memory for your children.

5. Honor our elders for they hold much knowledge. Follow the instructions of your parents and bring honor to their household. Insist that your children do the same.

6. Honor Nature and the spirit of the Earth; do not destroy any of the God or Goddesses creations without just cause.

7. Regard sexuality as sacred and do not defile it with abusive acts, or use it as an excuse to degrade others.

8. Do not set yourself up higher than anyone else, nor take tangible items from another, nor steal their thoughts and present them as your own.

9. Do not speak falsely of others; neither gossip nor lie.

10. Do not covet what others have; rather, treat your belongings with respect and care.