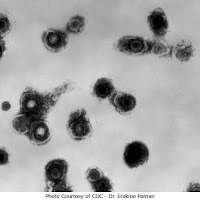 Chickenpox is a common illness that causes an itchy rash and red spots or blisters (pox) all over the body. It is most common in children, but most people will get chickenpox at some point in their lives. Even if they have been vaccinated.

Chickenpox usually isn't serious in healthy children. But it can cause problems for pregnant women, newborns, teens and adults, and people who have immune system problems that make it hard for the body to fight infection.

After you have had chickenpox, you are not likely to get it again. But the virus stays in your body long after you get over the illness creating a natural immunity to further infections.

What causes chickenpox, and how is it spread?
Chickenpox is caused by the varicella-zoster virus. It can spread easily. You can get it from an infected person who sneezes, coughs, or shares food or drinks. You can also get it if you touch the fluid from a chickenpox blister.

A person who has chickenpox can spread the virus even before he or she has any symptoms. Chickenpox is most easily spread from 2 to 3 days before the rash appears until all the blisters have crusted over.

You are at risk for chickenpox if you have never had the illness.  If someone you live with gets chickenpox, your risk is even higher because of the close contact. Even if you have had the vaccine, you should treat chickenpox with caution as the vaccine does not protect 100% and weakens over time.

It usually takes 14 to 16 days to get the symptoms of chickenpox after you have been around someone with the virus. This is called the incubation period.

After a chickenpox red spot appears, it usually takes about 1 or 2 days for the spot to go through all its stages. This includes blistering, bursting, drying, and crusting over. New red spots will appear every day for up to 5 to 7 days.

You or your child can go back to work, school, or day care when all blisters have crusted over. This is usually about 10 days after the first symptoms start.

Other illnesses can have symptoms like those of chickenpox. For this reason, you may think you have had chickenpox twice when instead you have had two different infections.

How is chickenpox diagnosed?
Your doctor will ask you about your symptoms and will examine you. This usually gives your doctor enough information to make a proper diagnosis.

Healthy children with chickenpox symptoms may not need to visit a doctor. You may be able to describe your child’s symptoms to the doctor over the phone. Then your child won't have to leave the house and risk spreading the virus to others. But it is important to check with your doctor to find out if he or she wants to see your child.

Teenagers, adults, pregnant women, and people with health problems need to see a doctor for chickenpox. This is especially important for pregnant women, since chickenpox during early pregnancy can cause birth defects. Call first to make an appointment and to discuss whether you need to take any steps to avoid spreading the virus when you arrive.
94 comments:

Now, it's important to remember that if you aren't buying organic every time, you are still going to get some chemicals in your food. Pesticides and fertilizers do, minimally, enter in to all plants they are used on. However, some plants are simply not sprayed as much as others and those with thick or removable skins will contain MUCH less chemicals than those where you are going to consume the skins.

A few good basic rules for buying are -

If you eat the skin, buy organic! No matter how much you wash it, you won't wash off all the chemicals!

It's also very important to wash those foods where you are going to be removing the skins! As you cut in to produce, the chemicals and dirt from the skins are introduced to the inner layers, so make sure to wash even thick skinned fruits and veggies very well before cutting!

If it's imported, organic is a safer option. Many countries where food is imported from does not have the same regulations as we do on chemicals, fertilizers and pesticides. So even though NONE of these things are healthy, the ones used in other countries may actually be MORE harmful than those used here.

The Dirty Dozen
These are fruits and veggies you need to make sure you are ALWAYS buying organically! They are heavily sprayed and thin or no skinned, so you are actually going to be eating the chemicals first hand!

The Clean Fifteen
Now, for the good news. Not ALL items in the produce section are dangerous. Although, as I said before, it's always best to buy organic, these options are not generally as heavily sprayed, or have removable outer skins.