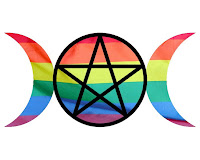 It has recently come to my attention that there continue to be certain sects of Wicca which discourage or even prohibit Homosexuality. To me this is not only shocking but disturbing. I understand that each branch of Wicca, as each branch of Paganism, is going to have it's own rules, teachings and specific beliefs, but it's difficult for me to understand how any branch could expect someone to deny their true self.

Many Wiccan covens do stress an equal balance of male & female members as a way to balance the male & female energies. However, ones sexuality is rarely a factor even in these covens. Of course there are covens which don't have an equal balance and will take any worthy initiates regardless of gender or sexuality. There are also an increasing number of Pagan Groups founded by or for gay members, and these groups may take only initiates of one gender rather than looking for a balance.

Overall, you'll find sexuality to be a non-issue in the Pagan Community. Most Pagans have the simple belief that as long as you're happy in your relationship, the gender of your partner simply doesn't matter. What matters is that you are loved and that you love.

There are of course those who come in to the Pagan community tightly clinging to more conservative views based on their previous understandings of religion & spirituality. And in times when homosexuality was still culturally unacceptable this was even more common. Unfortunately these beliefs have bled in to some traditions, writings and teachings. However, this trend is coming to an end and you'll tend to find a larger portion of Open Gays and Lesbians at Pagan gatherings than you will in the general population.

For those who buy in to the need for gender equality within working circles or covens I say this: "We are all half male & female from birth, the genitalia which we physically possess has no bearing on spirituality." The majority of the Pagan world buys in to the live and let live rule. For those who are Wiccan, there is the ever present "An It Harm None, Do What Thou Wilt" rule as well. Since Homophobia and Intolerance are very harmful, it's hard to defend such attitudes while living the Wiccan life.