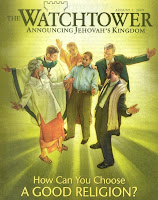 For those of you who don't know, my mother is a Jehovah's Witness. I was raised to be, but the Great Goddess was in my heart from day one, so that didn't work out so well! Anyways, we were talking the other day and she was telling me about a conversation I just have to share with all of you.

Apparently, she and a group from her Kingdom Hall (their church) were doing their door to door work when one of the women in the group noticed a Pentacle on the property or door or something of one of the houses and said she was afraid to go to the door. The woman said she hated going to door like that because the people were scary. My mom said, and I quote: "I'll take a Pagan over a Born Again any day!" and happily took the door for her.

She said when she got back in the car the lady asked her why she was so happy to take that door knowing their could be a witch behind it. And my mother said "Because Pagans know the Christian faith better than Christians do." She said she went on to tell the woman that while Christians claim to know what their bible says that most of them have rarely read it beyond the popular scriptures or readings done in church. Pagans on the other hand not only know what is in the Bible, but know the history behind it and behind the Church and Religion which came out of it.

As a Pagan, I would have to agree with her. I have gotten in to many a biblical debates with Christians, and known the Bible better than they do. That said, I have to give credit to my mother for that - Although not so happily. There is a great deal of religious contention between my family and I but compliments like that one show me that at least someone is opening their eyes to the fact that Pagans aren't Cat Sacrificing, Devil Worshipers who will beat up old ladies and rape children - as I've been told in some forums... Even if that person does still believe her Pagan daughter is doomed - at least she knows we aren't all crazy!