Charity, a part of life and a factor of faith... 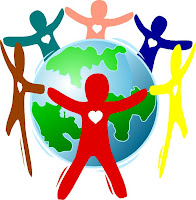 If you're a long time reader of my blog you've seen my posts about "living your faith." I am one of those people who believes that actions speak louder than words, and every day actions speak louder about who you are than the "holiday" actions do. For me, my faith is a part of who I am, it's not something that shows it's head on Sabbats and Esbats and then forgets all about it on the day to day.

Obviously, I am not super woman. And unfortunately I don't have the option to twitch my nose and end hunger, illness or war. But I do have the ability to give every chance I have. Charity, for me, is very much a matter of faith. I am a firm believer in equality, nature and creating a more positive life, a more positive world.

I'm not rich, in fact income wise, I'm not even considered "middle class." But in no way does that mean I can't be charitable. Charity is defined as "generous actions or donations to aid the poor, ill, or helpless." So from where I sit, you don't have to be monetarily rich to be charitable. Instead you simply have to be able to act in a generous way which aims to help those in need.

With that in mind, I wanted to talk about some ways that ANYONE can give charitably of themselves.

The most obvious and easiest way to be charitable is to donate to a cause for one thing or another.  (See my list of "favorite charities" below)

Donating clothing, shoes, toys and other every day goods to shelters, or other "in need" groups like Good Will or Red Cross.

Donate Blood! One donation can save 3 lives!

Be an organ or body donor! I know it's not something most people want to think about, but
eventually, we all gotta go, so why not make sure you do some good on your way out. If you aren't picky about where your body goes, just become an every day donor... If you prefer your body goes for education or forensic study you'll want to do some research and make arraignments early.

Donate your time! Libraries, soup kitchens, park services, homeless shelters, medical clinics and hospitals are ALWAYS looking for volunteers. You can even join with groups like Habitat for Humanity to help provide housing for low income or in need families. Even things like cleaning up local beaches, parks or camping grounds is beneficial for those who live around them - or for those who have to sleep there...

Grow a garden, and share the extras! Fresh fruits and veggies are very pricy and for a great many families they are simply out of the budget... Sharing your extra tomatoes, cucumbers, apples or other home growns helps provide families who normally can't provide good, healthy foods for their families feed them well.

Work with friends to start a drive. Drives get the whole community involved by encouraging everyone within a town, district or other area to give together, which allows for much more to be given in the end.

Start a "children exchange" in your area. Our area does these from time to time. It's like a multi family garage sale where everyone can get rid of their kids stuff. But everything has a "flat rate" rather than having each family come up with their own prices. And usually the last day they do a "fill a bag for $5" event where you can really save big! Things like this allow families who can't afford clothing, toys or other children's items to buy what they need - or sometimes just want - without breaking the bank.

Start a blog or website! Believe it or not something as simple as an awareness raising website can make a huge difference. If you have ABSOLUTELY NOTHING else to give, you can still help raise awareness on an issue, illness or group... Blog about an illness, abuses, the homeless, or even about inspirational people who are making a difference and encourage others to do the same. Sometimes the best thing we can do is just get people motivated!

There are so many ways you can get involved, don't limit yourself by the steps others have taken. If you see a need out there, jump in and take action. When we act to change the world for the better we improve everyone's lives.

While many may not see this as something that charity as a matter of faith, remember that the Goddess Empanada rules over all charitable actions as well as hospitality and asylum. From where I stand she's a Goddess we could all get to know a bit better!

National Vaccine Information Center - As a victim of Vaccine injury, I am a rather vocal proponent of vaccines and other unnecessary medications. However, I am a firm believer that medical choices should be made only after educating one's self on the issues surrounding them - Vaccines are no different! NVIC is dedicated to providing people with a rounded education about vaccines, vaccine laws and both pros and cons of deciding to or not to vaccinate yourself or your family.


Somaly Mam Foundation - Founded by sexual slavery survivor, Somaly Mam, the foundation supports rescue, shelter and rehabilitation programs across South East Asia, where the trafficking of women and girls, some as young as five, is a widespread practice. The Somaly Mam Foundation also runs global awareness and advocacy campaigns that shed light on the crime of sexual slavery and focus on getting the public and governments involved in the fight to abolish modern day slavery.

The Somaly Mam Foundation has taken on this challenge. Founded in 2007 by trafficking survivor, Somaly Mam, the Foundation is dedicated to ending sex slavery around the world with a results-oriented, three-step approach: Action, Advocacy & Awareness.

Dollar4Life - Dollar4Life is a grass-roots campaign to raise awareness and one million dollars for researching ALS, or Lou Gehrig's disease. Donations go to Prize4Life, a results-oriented 501(c)(3) organization founded to accelerate ALS research by offering substantial prizes to scientists who solve the most critical challenges in developing a cure.

Free Rice - Play a simple game, expand your brain...  And feed a child! For each correct answer you get on this multi-choice trivia style game The World Food Program is donated 10 grains of rice...  According to the United Nations, about 25,000 people die each day from hunger or hunger-related causes, most of them children. Though 10 grains of rice may seem like a small amount, it is important to remember that while you are playing, so are thousands of other people at the same time. It is everyone together that makes the difference. Thanks to you, FreeRice has generated enough rice to feed millions of people since it started in October 2007.


Child's Play - Since 2003, over 100,000 gamers worldwide have banded together through Child’s Play, a community based charity grown and nurtured from the game culture and industry. Over 3.5 million dollars in donations of toys, games, books and cash for sick kids in children’s hospitals across North America and the world have been collected since our inception.


Children Of The Night - Make a difference in the lives of hundreds of children each year. Children of the Night's commitment to rescuing these children from the ravages of prostitution is shared with a small but committed group of detectives, FBI agents, and prosecutors in Los Angeles, Hollywood, Santa Ana, Anaheim, San Diego, other areas of California, Las Vegas, Portland, Billings, Montana; Seattle, Washington; Miami, New York, Minneapolis, Atlanta, Phoenix, Hawaii and Washington D.C. — all stops on the child prostitution circuit. And our numbers keep growing as more and more dedicated individuals become concerned about the welfare of these desperate children.

Heifer International - Heifer Intl. was founded on a simple idea! Give a man a fish, feed him for a day. TEACH a man to fish and feed him for life. This principal has been of great use for these wonderful giving people! Rather than putting your donations towards simply sending food, Heifer Intl. has mad a point to TEACH! Their foundation not only helps to provide animals for third world and hungry nations but they actually take the time and effort to teach these people how to farm, how to grow and how to create their own new food source...What a blessing to know that your small donations are literally able to create change - not just for one person or for one meal, but for an entire village forever!

Planned Parenthood -  While many rumors fly around where PP is conserned, the truth is this - Planned Parenthood provides numerous health services to and for men, women and children who can not afford traditional medical care. These services include, but are far from limited to: Cancer Screenings, Basic Health Services, Sex Education as well as OB/GYN services and on occasion, abortion services. Because Planned Parenthood provides services for low or no income clients, they rely on the donations and support of the general public to enable them to continue to provide the services they do. Your donation not only pays for doctor fees, but also for preventative medications and treatments for illnesses, as well as ongoing care for all types of ailments and family planning services.

If you know of others, please feel free to share them in the Comments area! I would love to check them out!