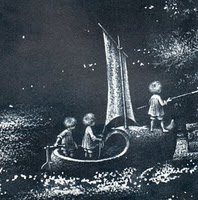 When I was a child my mother knew a seemingly endless list of poems, songs and stories.  Most of them were told to her when she was a child, passed down from times when children played all day with friends and night was time for family dinners, bed time stories and mommy kisses!

One of these, one of my favorites to this day, was a story about three little boys sailing off through the sky in their wooden shoe. Wynken, Blynken & Nod was written in the 1880's and originally published in 1889 as "Dutch Lullaby." While it was definitely a throw back to beliefs and stories of the old world, it was written and embraced by Americans. As a child, I fell in love with the idea of sailing through the stars. As a mother, I love watching my children imagine the same wonder as they imagine the possibilities! But, as a Pagan, I love the symbolism and find it to be the perfect embodiment of both the magick of the stars and the magick of childhood all rolled in to one!

Here, is that poem! Enjoy!

Wynken, Blynken, and Nod one night
Sailed off in a wooden shoe---
Sailed on a river of crystal light,
Into a sea of dew.
"Where are you going, and what do you wish?"
The old moon asked the three.
"We have come to fish for the herring fish
That live in this beautiful sea;
Nets of silver and gold have we!"
Said Wynken,
Blynken,
And Nod.

The old moon laughed and sang a song,
As they rocked in the wooden shoe,
And the wind that sped them all night long
Ruffled the waves of dew.
The little stars were the herring fish
That lived in that beautiful sea---
"Now cast your nets wherever you wish---
Never afeard are we";
So cried the stars to the fishermen three:
Wynken,
Blynken,
And Nod.

All night long their nets they threw
To the stars in the twinkling foam---
Then down from the skies came the wooden shoe,
Bringing the fishermen home;
'T was all so pretty a sail it seemed
As if it could not be,
And some folks thought 't was a dream they 'd dreamed
Of sailing that beautiful sea---
But I shall name you the fishermen three:
Wynken,
Blynken,
And Nod.

Wynken and Blynken are two little eyes,
And Nod is a little head,
And the wooden shoe that sailed the skies
Is a wee one's trundle-bed.
So shut your eyes while mother sings
Of wonderful sights that be,
And you shall see the beautiful things
As you rock in the misty sea,
Where the old shoe rocked the fishermen three:
Wynken,
Blynken,
And Nod.