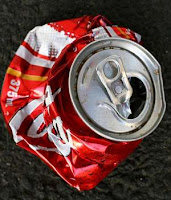 Generally I don't believe in boycotting companies. For the most part this is because when we boycott a company we are hurting the little guy more than we are the company. However, in cases where a companies actions are hurting even tiny are peoples, I think it becomes imperative that we use our dollar to vote against the harmful actions of companies.

In this case, I'm calling for a boycott of Coca Cola. A company who chooses to use their money to completely decimate the remaining ground water in India. Over the last decade, India's water tables have dropped between 10 and 15 FEET PER YEAR! Farmers and Villagers who depend on wells and other naturally occurring water ways for their families and lands, are now being forced to go without.

The water sources in these areas of the world are from the trickle down of snow capped mountains that has occurred over millions of years. Now, this precious element of life is being sucked up and trucked out. Coca Cola uses 3 liters of water for every 1 liter they bottle. And shipping what they do bottle out of the area in to other countries and other areas around India where land owners can afford to purchase it.

In a country where less than one third of the inhabitants earn enough to have luxuries like electricity and windows, depleting natural water ways is in fact killing people.

Now, Coca Cola has a few arguments that they feel are valid. So, lets see what those are...

First, they claim that the drought in the areas surrounding their plants is because of a lack of rain, and not because they are using to much. To this I say, if Coca Cola wasn't sucking up the water that is there, the rain fall that they get (which has NOT been exceedingly low) would be sufficient.

Second the argue that they use a much lower amount of water that farmers do to water their crops. Which I'm sorry, is the most ridiculous argument I have ever heard! If you passed 3rd grade science you understand that when you water plants, excess water trickles back down in to the local water system, feeding the rivers, wells, and streams. And when you pump it up, stick it in bottles and ship it out of the area however, the water does NOT recycle itself back in to the system, it's just gone.

Third, Coca Cola claims that the people who live in these areas are "happy to see the economic upswing" to their areas. Unfortunately this is FAR from the truth. While those few who work for the company obviously enjoy a few perks, the majority of those in the area don't share this joy. In fact, numerous Coca Cola Plants in these areas have been forced to close after violent riots killed workers.

To make things worse, Coca Cola is not stopping with India. In fact familiar stories are now coming out of China and Mexico.

Do they have other options? Of course they do! Although these options are more expensive for Coca Cola to set up, over time they would NOT be of a much greater expense and they would provide the company with a much higher volume of water to use. One of these options would be to stop using fresh water and use purified salt water. Plants set up alone ocean shores would allow them to pull ocean water, purify it, and produce their products. Is this an ideal option? No, but frankly, I don't believe there is an ideal option for both sides of the issue. The ideal option would be for people to stop drinking soda and bottled water, but I don't see this happening. And that's certainly not an option which would benefit Coca Cola...

What can be done? How can YOU help change this situation? Well, there are two very simply actions you can take.

First, stop spending money on Coca Cola products. Companies like Coca Cola and others depend on profit, and without sales, they can't profit - again, refer to your 3rd grade education for that lesson. Take away that profit, and you take away the companies power.

Second, let Coca Cola know WHY you are taking this action! It's important for consumers who choose to boycott, this or other companies, to inform the company as to WHY they are taking action against them. Why? Because when companies see a loss of profit without knowing why, they are less likely to stop the actions which led people away in the first place.

You can contact Coca Cola by mail or phone:

Please let them know that the lives of people are more important that profit!