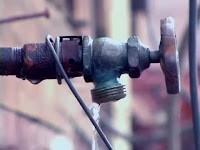 I hope, if you are old enough to read my blog, that you already know the importance of water, so I'm going to skip over all the reasons why we can't go without it. If however, you need that information, or you don't understand the importance of water to our world and our lives, please head over to Google and do some searching and reading on the subject prior to continuing to read this.

For most of us in the "modern world" water is not something we think about. We don't have to worry about how we're going to get it today, if we're going to run out of it or if our supply is clean. We simply walk in to the kitchen, turn on the sink and stick our glass under it... But, we are the lucky ones, and unfortunately, we're the minority.

Both world wide, as well as right here in our own country, water has been, and continues to be, something that is in fact a prized substance. When I say "lack of water" most people flash to a third world area where running water simply doesn't exist. Unfortunately though, a lack of water, or a lack of clean water is NOT limited to areas of "third world" or even developing countries. Instead, it's becoming a growing problem even in the US and other very modern countries as well.

If the issue was simply a lack of water, the answer would simply be - truck it in or even pipe it in... Unfortunately THAT seems to be the biggest issue of all. Like oil in the past, water privatization is becoming a growing plight on people all around the world.

In recent years the biggest offense in the US has been Detroit, who's water company has become notorious for over charging, prematurely closing and even falsely charging customer accounts. One woman I saw interviewed had her water turned off because she was $800 behind on her bill, even though she had been making payments. Now, the first thought you're having is "If you own $800, of course they will shut you off." And you're not completely wrong. BUT, the issue was not that she was shut off, but that in the process of trying to have her account turned back on - a TWO YEAR process - her bill had ballooned to over $8000, even though it was turned off.

Now, I don't know about you, but I don't think my water bills over the last 10 years would equal $8000. So the idea of acquiring $8000 in charges when you don't even have access to water is completely mind blowing to me. What's more is the fact that this type of over charging is completely legal! How can that be? Well, it's fairly simple. Private companies have the right to charge just about whatever they choose for goods. In this case, that "good" is water. They have the right to charge customers whatever they feel is a proper price, and they also have the right to add additional fees - such as overage fees, late fees, shut off fees, and whatever else - to open accounts, and as long as there is money owed on an account, they have the right to refuse to close it - which would prevent it from acquiring new fees...

If we leave the US we start to see more and more stories about how the privatization of water is literally a deadly idea. Each and every day nearly 4000 children world wide die simply for a lack of access to clean water. And for the most part, those deaths are NOT because these children live in areas where clean water is hard to access. Instead it's because the individuals who live in these areas do not have an income which allows them to access "luxuries" like clean water...

Water companies throughout Spain, Tanzania, Bolivia, India and numerous other areas have made a habit of charging poor families amounts which often equal months or even years worth of income simply to have the ability to tap in to the water pipes and/or sewage pipes which often flow within feet of their homes.

Unfortunately, unlike oil, water is not something we can live without. You can't simply start walking or change to an electric alternative, the way you can with oil. Water is something that we all need. Because of that, it's rather difficult to "rebel" against the companies which seem to think that water is a commodity to be bottled, piped, and sold for profit.

BUT, you can in fact you can limit your water use, and do your best to stop your own family from over using or wasting the water that you have. You can also, if you were so inclined to, make donations to those non-profit groups who are dedicated to helping these families. AND you also have the right to take action by taking concerns to your government officials, and to the water companies themselves. Stop buying bottled water, and even, if you are lucky enough to live in an area where it's available, start drinking natural spring water...  All of these actions can, at least in a small way, make a difference in the big picture!