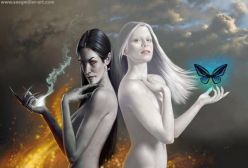 The Wiccan Rede gives us the ideal of "Harm None." However, I'm not quite sure how that's supposed to be attainable. While I'm not technically Wiccan, I'm Wiccan-ish, I guess. I follow the Wiccan Calendar, I use a general Wiccan ritual set up and appreciate the idea of peace and love which Wicca portrays. However, one thing that has always bothered me was this ideal of "Harm None." When I was a kid I was taught that God (the Christian God mind you) handed his people an unfulfillable law so that they would always remember they were imperfect and have a need for his forgiveness. To me, this was just disgusting, and not a God I felt I could give any allegiance to. So when I discovered Wicca and found the flexibility of their "rules" I was pleased. The idea of just don't hurt anyone, sounds great. But as I've aged, I've realized it's just as impossible to live a life which causes no harm as it is to live a life which follows the Messianic Law which the Ancient Israelites were supposed to keep.

Now, I'm an Eclectic, my basic beliefs balance not only on a collection of religious teachings both within and without Paganism, but also on some basic common sense. So rather than striving to fulfill an ideal that I simply can't live up to, I prefer to have some sense about the matter. I believe, as I teach my children, to strive for the greater good rather than a "no harm."

But what is the greater good? To me, it's different for each situation, and it's different for each person. In short it's my way of saying do what you believe is the best for everyone and everything in your situation. We know it's harmful to the earth to drive a car, for example, so rather than driving twice as far to go to the wholefoods store, learn what products and produce you can purchase closer that are just as healthy. Or you know telling your best friend that their hubby is cheating is going to hurt her, her marriage and your friendship, but you need to consider what's better in the long run? Letting him run around, knowing what's going on? Possibly putting your friend at risk for an STD? or Hurting her feelings but allowing her to keep herself safe? For me, it was telling her, but for you it could be different.

My point is that we need to focus not on doing NO harm, because while a wonderful idea, it's simply not possible, but on doing whatever is going to create the most positive outcome over all. Sometimes it's not easy to see what' the positive outcome will be out of things like a cheating spouse, but that's when we need to consider all our options before we act and do what we feel is best. Are we going to make mistakes? From time to time we all do, it's just a part of being human, but what matters is we try.