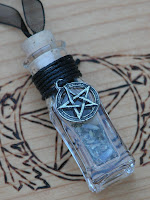 If you're anything like me you have a small addiction to Witchy Movies & TV shows... Charmed, Buffy, The Craft, yeah, without doubt some of my favorites. And with most of them you'll see a general "no personal gain" rule when it comes to magick. For Charmed fans you've heard it over and over again, as if it were written in stone somewhere. For those of you who are more fans of Buffy or The Craft you'll see it implied, even if it's not spoken. Every time someone uses magick for personal gain reasons disaster strikes. So for those who are just starting out on their Witchy Path it can be an anxiety they face, not know if it something they should put worry in to or simply ignore.

The truth of the matter is simple - There is NO Personal Gain Rule! It's purely impossible to do something which doesn't cause some kind of personal gain. Even to step in and help someone else makes our life better... Personal gain is simply a fact of life, it's not a bad thing.

It's also worth noting that since witches come in every walk of life there is really no universal RULES over the uses of Magick. While some traditions or groups do come with their own beliefs and rules, overall there is generally no such thing. A Christian Witch is not going to be bound by the rules of a Voodoo Priestess or a Wiccan Witch...

The majority of witches in the US and Europe today to tend to at the very least see the Wiccan Rede as a good basis for their own personal practice. For those that follow a tradition or belief system that falls under the Wiccan Umbrella the Rede is one in a few "rules" which need to be looked to. However, even when we consider the Rede, the Threefold Law and what has been referred to as the "The Witches Law," magick for personal gain is not only not spoken against, it's not even mentioned!

Why is it not mentioned? Well, because there really is no reason to bring it up. As I said above, Personal Gain is not a bad thing! It's simply a fact of life. If we never sought to gain anything in our lives we would never grow and frankly never survive to see tomorrow!

Instead what is mentioned is the use of Magick which will cause harm - either to others or to ourselves. The Wiccan Rede states "An Ye Harm None, Do As Thou Wilt" which simply means as long as you aren't harming anyone go right ahead and do it. The "Threefold Law" states that whatever we put out we will have returned to us "Threefold." So again, there's the general implication that if we are doing harmful magick, we'll only reap harm in return. I've only come across the "The Witches Law" a few times, and I've heard it referred to as the "10 Commandments for Witches" a few times, but generally it simply backs up and expands upon the idea that when we sew negative seeds we reap negative fruits.

All in all, there is simply no reason to worry about Personal Gain when thinking about doing magick. On the other hand we do consider how our magick is going to affect both others and ourselves. For myself I tend not to focus on HOW or IF my actions will affect someone negatively, but rather I focus on if I am acting for the greater good. I am a firm believer that harm is subjective, and so I prefer to focus on acting for the greater good of those involved. In doing this I understand that even if my actions DO cause some "harm" or what could be seen as harm by some, the benefits (or positive) is going to outweigh the risks (or negative).