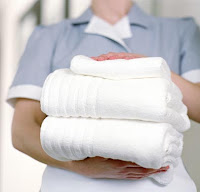 **Green Cleaning for Dummies is an 8 week program
Week 2:  The Laundry-Beast

Step 1:   Purchase a new jug of white vinegar and baking soda specifically for your laundry room.

Step 2:   Make a new friend known as Sodium Percarbonate which is simply a dry form of hydrogen peroxide (its washing soda mixed with hydrogen peroxide to make it stable in dry form).    Ecover's non cholorine bleach is a common source, but you can find similar hydroden products in hardware and pool stores.    It's the same stuff that is likely in your medicine cabinet in a brown bottle just in dry form.

Step 3:   While it isn't strictly necessary, you can take this week to make a new friend
known as WASHING SODA (washing soda is sodium carbonate/soda ash -- essentially baking soda that has had all of the water removed so it is stronger--you can even make the stuff but that's for another thread).    If you can't find it or Ecover don't fret, OxyClean or similar will make due.

A lot of people don't realize that there is no magic to OxyClean -- it is simply hydrogen peroxide and washing soda mixed together.  The problem is that you are never sure what other "fillers" they put in there.  So if you can get them separate you'll have better control.

Note:  This week was going to be an introduction to borax (see Borax note below).    You don't have to use it at all!  But if you are going to, I think you should at least know how to use it responsibly.    Hydrogen peroxide is a much safer and effective choice.

Step 3:  If you are so inclined get a downey ball (trust me...who said we had to put gross chemical downey in it?).    If you already have one or your washer has a place for "fabric softner"  great!

Step 4:  Designate a measuring pitcher style measuring cup and/or regular measuring cups just for the laundry.   Kind and number doesn't matter.  I just eyeball it and make due ; but other people are fussier and particular about wet and dry.


Use the Triple Threat to manage your laundry!

To clean the residue grunge and deposits out of your washing machine:

Set your washer to "heavy/soiled".  Fill your washer with hot water and add 3 cups of vinegar and 1 cup of baking soda.   Let it run through its cycle but stop it after its spin and drain.    Get a rag and wipe down the drum.    Follow with a cold water rinse on the "heave/solid" setting.
Baking Soda!  Boosting the power of your detergent:

Add 1/2 cup of baking soda to the wash cycle.
If the clothes/towels are especially odoriferous and 1/2 cup to the rinse cycle.
Washing Soda!  Boosting the power of your detergent with a kick:

Add 1 to 2 tablespoons to the wash cycle.   Works great on cloth diapers!   Use together with washing soda or alone.Vinegar! Whiten Whites, Brighten Colors, Freshen, Reduce Static Cling, and Soften

To Freshen, Soften, Brighten Colors, and Whiten Whites:  Pour vinegar into the downey ball and toss in with the wash.  The vinegar will release during the rinse cycle  and will make those bold colors stick just like it does for Easter eggs, will reduce odor, and will brighten the whites and soften the laundry by removing the gunk that turns whites yellow and makes fabric stiff.

For Sweat Stains and Ring around the Collar:  spray stains with straight vinegar before washing.     Use on cloth diapers that DO NOT have elastic (prefolds, flats, contours, natural fiber inserts and similar)

What's the deal with Borax?

*CAUTION:  Borax is a phenomenal laundry booster for a nasty load, and can be used later to make much stronger cleaning solutions for the really heavy duty jobs.  You don't have to use it at all!  But if you are going to, I think you should at least know how to use it responsibly.  Keep this on a high shelf away from young children.  Borax is natural yet is definitely not the best choice for everyday cleaning.  Borax is NOT edible.  Keep it out of reach of children and pets.  It is harmful if ingested, however, you must deliberately eat it and since it is a salt it would be a feat to eat it because it is just as unpalatable as straight baking soda or simple table salt.  Have respect for all chemicals including soap!   Borax will not burn you (though you can, like anything be allergic to it), it is non reactive, and the box you buy is in crystal form so there is no dust and no breathing hazard (as long as  you don't snort the stuff by sticking your nose in the box).  You only need a very small amount of it for the tough, nasty, heavy duty jobs that nothing else can touch.    Don't over use it.  Don't reach for it first.  Don't reach for it every day.    One box should last you a very long time -- I'm talking YEARS!   I just got through using a box that is 6 years old.  It is used ONLY for MUSTY items I'm washing that other washes haven't touched.

To Boost the Detergent Power and Condition Hard Water:  Add 1/4-1/2 cup to the wash (depending on load size) for laundry that needs that extra kick in the pants.  NOT for every day...it is for laundry that is really nasty and/or moldy/musty.  So despite what recipes for homemade laundry detergents you find floating around that have it as a major ingredient, skip the borax.  That's like killing an ant with a Sherman tank.

Especially Stubborn Stains and Smells (like mildew, fermented urine):   Pre-soak the items in the wash with 1/2 cup borax (or 1 tbsp per gallon).  Let pre-soak at least 30 minutes.    Wash and double rinse.

TIP:  Got really, really stubborn toilet stains that you can't get out no matter what you do?  Before you resort to that blue stuff you need a gas mask for,  put in 1/4 cup of borax and let it soak before scrubbing.