How Many Gods Are There? 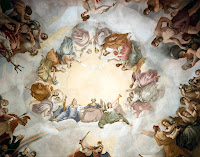 I get this question A LOT! How many Gods? It seems like everyone wants a number. I think the idea of the unknown within "religion" may be a bit much for some of those on the outside... But the truth is there is simply no answer to this question, or at least no easy one. Each person has their own interpretation of God or Gods - what, who and how many there are...

When it comes down to having to answer this Pagans fall in to  any of 6 categories. In order to truly understand "how many" Gods there are you have to have a grasp on the different belief systems which shape these ideas. So what I'm going to do is try to explain those belief systems rather than give you a number - which just isn't possible anyways.  It's also important to understand that not everyone will fit in to just one of these lines of thinking. Many will adhere to combinations or even slight variations of these, but you can use these as a basic guide to help you understand.

The first category I'm going to address is Atheism. Many people seem to think that you MUST believe in God or Gods in order to belong to a religion or to be spiritual. Most Pagans DO believe in some form of God, however there are many Atheistic Pagans. Many people hear the term Atheist and think "belief in Nothing" when in fact Atheism simply means "No belief in GOD(s)." As a matter of fact, Atheism does not mean lack of spiritual beliefs at all, as there are many spiritual beliefs, traditions and practices which do not require any belief in God. While Atheistic Pagans can have any number of beliefs on the Spiritual, I have found that most fall in to one of two groups. First there is the "Everything has Energy" group which mostly believe in "energy" over "spirit." And Second there is the group which believes that the spirit world, other levels of reality and so on are in fact reality, but that there simply is no Spirit being or Higher Power outside of ourselves...

Many Atheistic Pagans are, at least in a minor form Animistic in their beliefs as well. Animism is the belief that everything has a spirit. To quote Walt Disney Pocahontas for a moment " I know every rock and tree and creature Has a life, has a spirit, has a name..."  And that's pretty much the basic idea of Animism. Everything has a spirit. For those who see this in an "Atheistic" fashion this spirit is usually seen as a "life force" of some kind. For those who are more Theistic this could be a life force of sorts or it could be that the Gods reside within all living things...  Animistic beliefs are often combined with other Theistic beliefs.

The majority of Pagans whom I have encountered are in fact Theistic. But there is even some disagreement between groups on this belief. The majority of Pagans are NOT Monotheistic, however, it is a prevailing belief among some traditions and teachings. Monotheism is the easiest form of Theistic beliefs for those outside of Paganism to understand. This is due in no small part to the fact that the worlds three most popular belief systems (Christianity, Islam & Judaism) are all Monotheistic. However, the Pagan view of Monotheism tends to be a little different than the Abrahamic view. This is because unlike Abrahamic belief systems Pagan belief systems DO tend to recognize other belief systems as valid. Pagan Monotheists believe, like Abrahamics, that there is but one Higher Power. However that's where the similarity tends to end. The difference is that while Abrahamics see God as a singular being, Pagans continue to honor the multiplicity of God. This means that although they believe in a singular Higher Being they do not limit themselves to a singular personality. Most see the names and personalities of individual Gods & Goddesses as different aspects of this singular Higher Power. I like to call this the Multiple Personality Higher Power. (lol)

While the Monotheists like the idea of simply having ONE Higher Power who is depicted on earth as the individual Gods & Goddesses. Duel-theists hold the believe in a Single God and a Single Goddess. Again, this idea tends to include the idea that "All Gods are One God & All Goddesses are One Goddess." Which again means that the individual names and personalities of Gods which we know here on earth are in fact representing different aspects of One God. And in turn those individual Goddesses represent one Goddess...

Then there are the Polytheists. Polytheism is the believe in multiple Gods & Goddesses. Our modern world has been exposed to this idea through the great myths of Ancient Rome, which have now become great movies and story books. Even children have seen Disney's Hercules at this point. However, again, no one can agree on just one form of Polytheism. There are in fact two schools here as well.

The first is what's called "Soft" Polytheism. This is the belief that while there are multiple Gods & Goddesses they are represented to the different belief systems through different names and personalities. For example, there is only ONE God of Fire, however, he is represented to humans through Angi (Hindu), Vulcan (Roman), Hephaestus (Greek) and others.

The second category here is "Hard" Polytheism. Which is in effect the belief in limitless amounts of individual Gods & Goddesses, each of which having their own separate name & personality. By this line of thinking just because Athena (Greek), Minerva (Roman) & Sophia (Gnostic Christian) are all the Goddess of Wisdom doesn't mean they are all the same Goddess. Hard Polytheists see each of these Goddesses as separate individuals rather than as different aspects of a single Goddess or as different representations of the same Goddess.

Now, as I said in the beginning some of these beliefs can be combined or altered in some way for individual believers or traditions, these are simply the basics. I'll use myself as an example of how one can belong to more than one category. I fall in to the Duel-Theistic, Animistic AND the "Hard" Polytheistic belief categories. I believe that everything in nature has it's own "spirit" which should be honored. I also hold a strong belief in a "Great God" and "Great Goddess" whom I see as the "Highest" Beings. Mostly I identify them as "Mother Nature/Earth" and "Father Time/Space." And I see them as even higher beings and the "creators" of the Gods. In addition to them I am a Hard Polytheist, as I believe that all the Gods & Goddesses which we know and honor here on Earth as in fact separate beings from one another and innumerable in number.

So, as you see while these categories can be singular beliefs and can in themselves define a number of Gods or Goddesses, they can in fact do just the opposite as well. To me what is important is not How many Gods there are, but that we understand our connection to that Higher Power, God/Goddess or Energy which is ever present to us and that we honor it accordingly. Names, labels and numbers really mean nothing. What matters is how we react to them, how we honor them in our day to day life and how we connect to them.