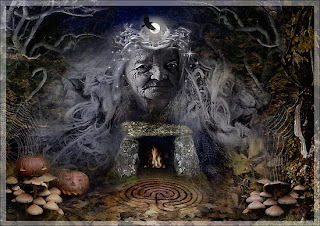 The Celtic year was separated in to two halves, the Dark and the Light. The Celtic New Year, Samhain (pronounced Sow-wen) takes place on October 31st or November 1st and marked the beginning of the Dark half of the year. Beltane, which takes place on May 1st, marks the beginning of the Light Half. While Beltane was a huge festival, most believe that Samhain was the more important of the two as it marked the beginning of an entire new year cycle. While our days are ruled by set hours and times, the Celts measured days starting at sundown and going through to the light until it was dark again. It was understood that in dark silence comes whisperings of new beginnings, the stirring of the seed below the ground. Whereas Beltane welcomes in the summer with joyous celebrations at dawn, the most magically potent time of this festival is November's Eve, known today as Halloween.

The word Samhain, comes from the Scots Gaelic word Samhuinn, which litterally translated means "summer's end."  In Scotland and Ireland, Halloween is known as Oiche Shamhna, in Wales it's Nos Calan Gaeaf, or the eve of the winter's calendar.  With the rise of Christianity, Samhain was changed to Hallowmas, or All Saint's Day to commemorate the souls of the blessed dead who had been canonized that year. So, the night before this celebration became known as Halloween, All Hallows Eve or Hallantide. November 2nd, became All Souls Day, a day when prayers were to be offered to the souls of all who departed and those who were awaiting entry to Heaven in Purgatory. Throughout time the Pagan and Christian traditions inevitably became intertwined and celebrations have been known to extend from October 31st through November 5th...

In the country, Samhain marked the first day of winter, when the herders led the cattle and sheep down from their summer hillside pastures to the shelter of the stable. The hay that would feed them during the winter must be stored in sturdy thatched ricks, tied down securely against storms. Those destined for the table were slaughtered, after being ritually devoted to the gods in pagan times. By this point, all the harvest must be gathered in -- barley, oats, wheat, turnips, and apples -- for come November and winter to follow. Popular belief was that the faeries would blast every growing plant with their breath, blighting any nuts and berries remaining on the hedgerows. Peat and wood for winter fires were stacked high by the hearth. It was a joyous time for family reunion after a long year of working the flocks and fields. The family would now come together together baking, salting meat, making preserves and readying for the winter to come.

In early Ireland, the people of the different gathered at their ritual centers, for Samhain was the first and most important calendar feast of the year.  The greatest assembly was the 'Feast of Tara,' focusing on the royal seat of the High King as the heart of the sacred land, the point of conception for the new year. In every household throughout the land, hearth-fires were put out as all waited for the Druids to light the new fire of the year -- not at Tara, but at Tlachtga, a hill twelve miles to the north-west. It marked the burial-place of Tlachtga, daughter of the great druid Mogh Ruith, who may have been seen as a goddess in her own right through past ages.

As with all the turning points of the Celtic year, the gods drew near to Earth at Samhain. So, many gifts would offered up in thanksgiving for the harvest.  Objects meant to symbolize the personal prayers & wishes of supplicants or ailments to be healed were cast into the high dancing flames and at the end of the ceremonies, brands were lit from the great fire of Tara to re-kindle all the hearth fires of the tribe. This was a time of renewal, new beginings, surely as people received the flame they felt a sense of the kindling of new dreams, projects and hopes for the year to come.

Through the centuries the Samhain fires continued to burn.  In the 1860s the Halloween bonfires were still so popular in Scotland that one traveler reported seeing thirty fires lighting up the hillsides all on one night, each surrounded by rings of dancing figures, a practice which continued at least up til World War One. Young people and servants lit brands from the fire and ran around the fields and hedges of house and farm, while community leaders surrounded parish boundaries with a magic circle of light. Afterward, the ashes from these fires were sprinkled over the fields to protect them during the winter months -- a practice which of course, also improved the quality the soil. The bonfire provided an island of light within the oncoming tide of winter darkness, keeping away cold, discomfort, and evil spirits long before electricity illumined our nights. When the last flame sank down, it was time to run as fast as you could for home, raising the cry, “The black sow without a tail take the hindmost!”

Even today, bonfires light up the skies in many parts of the British Isles and Ireland at this season, although in many areas of Britain their significance has been co-opted by Guy Fawkes Day, which falls on November 5th, and commemorates an unsuccessful attempt to blow up the English Houses of Parliament in the 17th century. In one Devonshire village, the extraordinary sight of both men and women running through the streets with blazing tar barrels on their backs can still be seen! Whatever the reason, there will probably always be a human need to make fires against the winter’s dark.

Today many of these customs and traditions may seem moot. Thanks to electricity and central heat, the majority of people no longer have even a working fireplace, although some do continue to use them as a decorative piece or in addition to more modern heating units. But, because of this general lack of hearth, the practice of dowsing the flames and relighting from a central or ritual flame has all but died out. However,  these customs have been altered and "miniaturized" by many in order to allow them to be used by modern day Pagans. Bon Fires may not light up the skies as they did in olden days, but alter fires and candles continue to burn through the night on Samhain Night as a way to ward off the cold and welcome the Dark Half of the year.

For those who have gardens, this is the time of year to finish bringing in any final "harvest" and ashes from any alter fires are mixed with the soil in order to protect. Offerings and "Prayer Items" are made to the gods and the new year is ushered in with celebration and light. This is also the time of year used by modern Pagans, as it was for those of olden days, to honor the previous year and those who had passed. It's a time for remembrance and honor as well as a time for rebirth and renewal. In addition to small alter fires and offerings, common practices include divination, mute dinners, which often include place settings for those ancestors to be honored during ritual, and of course pumpkin carving, costumes and trick or treat are common day practices among both Pagans and non Pagans alike...

For Wiccans and similarly believing Pagans, this is also a time of year used to honor the Crone and the Dying or Dead God. Any of the deities which represent these aspects may be used for ritual purposes.

The secular world lists January 1st, as the "New Year" and for those of us who have to live in that world - which as far as I know, is all of us, it is. However, a growing number of Pagans use Samhain in many of the same ways that more secular persons use New Years Day to celebrate the rebirth of the year... Setting new years resolutions and offering them up in their fires. For children, I have found this to be a wonderful way to start the celebration, and also a good way to teach commitment by renewing those resolutions come the secular New Year in January...