What to Read? Reading By Author: Zsuzsanna Budapest 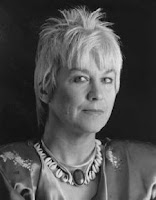 Zsuzsanna Emese Mokcsay is an American author born in Hungry who writes mostly on feminist spirituality and Dianic Wicca. The vast majority of people recognize her pen and religious name of Zsuzsanna Budapest or Z. Budapest. She is the High Priestess and the founding member of the Susan B. Anthony Coven, the first feminist and women-only witches' coven.  In addition to being an author she is the director of the Women's Spirituatlity Forum, a Playwright, and a composer.

Her mother was both a medium and a practicing witch who supported herself and her daughter as a sculptress. The themes of her art always celebrated the Triple Goddess and the Fates. This only encouraged "Z" to grow up respecting Mother Nature as a God.

Due to the poverty and political oppression of post-war Europe under the Russian occupation Z grew to be fiercely political. In 1956, when the Hungarian Revolition broke out, she as well as 65,000 others, mostly young workers and students, left Hungary as political refugees. She finished high school in Innsbruck, graduated from a bilingual gymnasium, and won a scholarship to the University of Vienna where she studied languages. In 1959, Z emigrated to the US and became a student at the University of Chicago, married and had two sons. In Chicago she studied with Second City, a theatrical school.

She started practicing solo worship of the Goddess at her home alter in her backyard around this time as well. At the age of thirty, she became involved with the Women's Lib movement in LA and became an activist, staffing the Women's Center there for many years.

Seeing a need for spirituality in the the women's movement she started the Women's Spirituality Movement. And founded the Susan B Anthony Coven, which has become the role model for thousands of other spiritual groups across the country.

Through this time period there were still laws against many religious and spiritual practices throughout the country. Z was arrested in 1975 for reading Tarot cards to an undercover policewoman. Although she lost the trial, she won the issue and the law against psychics was abolished just nine years later.

She has led rituals, lectured, taught classes & workshops, written articles and been published in hundreds of women's newspapers and magazines. And she has been a powerful influence to many current and no doubt future teachers and writers about the Goddess...

Z currently lives in the San Francisco Bay Area. She keeps herself very busy traveling, giving workshops and lectures (which this blogger would LOVE to attend). She also stars in her own cable television show called 13th Heaven. And is currently the director of the Women's Sprituality Forum, which sponsors a monthly lecture series in the Bay Area about the Goddess, spirituality retreats, and annual spiral dances on Halloween.

1975 - The Feminist Book of Lights and Shadows

2003 - Celestial Wisdom for Every Year of Your Life

Below you'll find a few "Reader Reviews" and "Reader Ratings" so that you can see what actual readers think... If you have read any of the writings of Z. Budapest and would be willing to share your feelings, please post them below in our comments area! (more will be posted as I get them)

"The only book I have had was Grandmother Moon.    It was actually pretty decent. Her writing is very "Goddess orientated, " as to be expected from her personal history, and if I remember right the book went through the moon cycles and had various myths and spells  associated to the 13 month lunar calendar.  In some places, she was a little too pro-menstrual cycle.  I would give it 3 1/2 stars out of 5."  ~ Meeshka Mouska