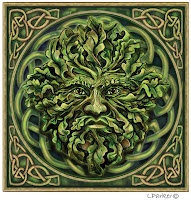 I belong to a couple of Pagan Parenting groups on numerous Social Networks. And I'm always a little surprised when I come across parents who aren't sure how to incorporate their sons in to their practice.  Recently this question was posted in one of my groups:  "Paganism is such a woman's religion, so how do I incorporate by boys?"  And I have read many similar questions over the years.

To me, these questions tend to answer themselves... If you view Paganism as something which is about women, it's going to be hard to include your sons, husbands or other men. But to me, Paganism is not all about women. Many Pagan paths do focus on the feminine and the Goddess/Goddesses. But the male aspect and the God are just as important. Nature is about Balance, and you can't have one without the other...  If we lack the feminine we lack life... If we lack the masculine we lack life... Personally I can see how many would see a lack of masculine focus in many a modern day Pagan path, but there is simply no need for that.

In my practice the male is as important as the female and neither aspect is more sacred that the other. However, even I, have a stronger connection to the Goddess aspects than I do to the God, simply because I am female. I can not, for instance, connect to the Father aspect of the God, the way I can to the Mother aspect of the Goddess, because I am not a Father...  But for the most part my practice and overall beliefs, have equal placement for both male and female.

Because of this, I see no issue including my sons when it comes to things like Sabbat celebrations. While I don't include them in ritual or anything that's overly religious (because of our interfaith home) I do include them in story and craft times which celebrate different mythologies and each area of the nature cycle.

Simple ways to include children - regardless of gender - include stories, basic crafts, nature walks, dance and songs, music (drums, rain sticks, bells and rattles are all great), rhymes or chants, dream journalism, basic herbalism, art, basic geology, gardening, cooking, learning about different Gods, Goddesses, Spirits and/or Fae... And numerous other things... For us, I like to focus on teaching my children to live Green and Clean and to celebrate the seasonal cycle.

Paganism doesn't HAVE to focus on either gender... And because each child is going to connect differently it's sometimes best to simply focus on neutrality and allow them to find their own connections to the divine. It's not so important that they have a direct connection to the Great Goddess at 4 years old. It's more important that they learn to honor the gifts she gives them. At 4 or 5 or even 10 it is difficult for them to even completely understand the concept of a God or Goddess. Hell, I know people who have issues understanding the concept of a God or Goddess at 20 or 40 years old... But learning to live in harmony with the world around them and honoring the gifts they have - food & water, sunlight, the moon cycles, animals, plants, rain, and so on - than it is for them to connect to an abstract idea of a God or Goddess.

If you do feel the need to impress God or Goddess on your child. Then you may want to brush up on the mythology surrounding the God(s) in addition to that of the Goddess(s).  And make a point to put time aside to celebrate the God aspect in addition to the Goddess.

In my own practice I do a daily devotional to the Great God first thing in the morning, and to the Great Goddess before bed. For me, I view the sun as male and the moon as female, so I use the balance of day and night to represent the balance of male and female in my daily practice. This, among other things, is a good way to help children remember to include both aspects in their day to day beliefs and practices...

If you choose to include your child in rituals, or host "child rituals" for them, you may want to ensure that you always include the male aspect as well as the female. If you invoke the Goddess, also invoke the God. When you talk about the age or condition of the Goddess, make a point to mention the God as well. Always include a representation of the God as well as the Goddess on a child's alter...

By making a point to include the God or Masculine aspects of your beliefs in your day to day and ritual life you will have no issue including your sons, husbands and other males in your celebrations.

Please don't take this to be my speaking out against Goddess worship in any way. As I said I, myself, have a stronger bond with the Goddess and female aspects of life than I do the male. If it were up to me, it would always be night, but again, we need to have balance, the dawn must come at some point...  And if your practice is currently Goddess centered and you feel fulfilled with it, then there is no need to change. But if you have a son or you want to include your husband, you may want to shift at least some of your focus to the Gods or male aspects simply so you can better include everyone better.