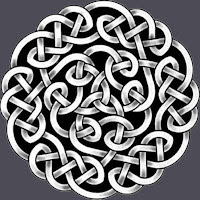 While many guides to Celtic art exist, all complete with meanings, the meanings of these designs have largely been lost to time. We currently know of NO authentic knots with meanings of love, loyalty, sisterhood or any of the other common things people attribute to the designs. The never ending, interweaving designs seem to suggest themes of eternity and interconnectedness, and knots may have been made at one time to trick evil spirits. However the actual spiritually connected meanings behind these works can only be guessed at today.

The many figures of interwoven people and animals could very well have represented the dependence of the worlds of nature and human life had on one another. Two or more knots laced together could easily have symbolized lovers, family, hunters & prey, God & man or any number of other meanings. Some knots no doubt were used as magickal talismans for protection or blessings. Today we tend to see the more decorative knots over those with purpose and reason behind them. Many knot designs are found in early Christian manuscripts as well as other written works, however, these would have been included out of beauty over a spiritual meaning.

We have almost nothing in the way of Celtic records, as they themselves lived by oral tradition and simply didn't have writings to leave. Because of this most symbols have been interpreted by archaeologists and other scientists or scholars who studied the symbols in context. Some of the ancient symbols of the Celts have had their meanings altered over time as the influence of Christianity influenced the cultures. As a general rule the shape of the design  often determines the "meaning" of the knotwork. Triskele & Trefoil shapes should generally been regarded as Triskeles.  Bird, fish or animal designs usually represent the attributes of the animals. Circles tend to represent unity or eternity. Spirals depict reincarnation or cycles of life, death and rebirth. Triangles and trefoils represent the dominions of earth, sea and sky. Squares or four-fold shapes are "Shield knots," symbols of protection.  None of the authentic Celtic Knot designs seem to be identifiable as Mother, Brother, Sister or Family, these instead have been altered knots to fit meanings or quickly assumed meanings rather than one based on knowledge or understanding, these however were simply not a part of the basic Celtic way of thought...