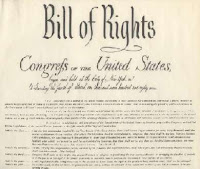 In the wake of all the drama surrounding the Muslim Community Center going up in New York I felt it was important to address the issue of Religious Freedom...  Many people in my experience are more than willing to spout off about the First Amendment and their Freedom of Religion when it fits their needs. Yet, in recent weeks, more than ever before, I have seen a HUGE outcry for discrimination based solely on Religion. I've seen it from every group imaginable and all in all it's both frightens and angers me...

The First Amendment to the US Constitution guarantees us the freedom of Religion. But what does that really mean? What is the first amendment?

"Congress shall make no law respecting an establishment of religion, or prohibiting the free exercise thereof; or abridging the freedom of speech, or of the press; or the right of the people peaceably to assemble, and to petition the Government for a redress of grievances."
— The First Amendment to the U.S. Constitution

The First Amendment is a part of the Bill of Rights. It prohibits the making of any law "respecting the establishment of religion," impeding the free exercise of religion, infringing on the freedom of speech, infringing on the freedom of the press, interfering with the right to peaceably assemble or prohibiting the petitioning for a governmental redress of grievances.

Okay, so what this all boils down to is that our first Amendment Guarantees us protection against any and all legal actions which limit out religious freedoms. However, it does not unfortunately guarantee us protection from the beliefs or misconceptions of others. What it DOES do though is allow all of us to opportunity to express our religious beliefs, enjoy our religious traditions and live the lifestyle we choose without threat of religious persecution by legal establishments or law makers.

In addition to this First Amendment, Title VII of the Civil Rights Act of 1964 prohibits discrimination based on race, color, religion, gender or national origin. While this law too, has since been amended to include sexuality and disabilities the basics of this Act have never been altered. The original purpose of this act was to prohibit employment discrimination, however, this part to has been extended in order to stop discrimination in other aspects of our lives as well.

Because of the combination of both the First Amendment and the Civil Rights Act, we are living in a society today which gives us the right to equality, regardless of our religious alignment... And also because of these laws that no one else has the ability to refuses us employment, service, entrance, or provide us with unequal treatment based on those alignments.

But what does all this mean in real world terms? And who does it REALLY apply to? Well, simply put it applies to ALL of us - Every single American, regardless of the popularity of their beliefs. That means that be we Pagan, Christian, Jewish, or Muslim, NO ONE has the right to stop us from having the same rights as everyone else. It also means that WE do NOT have the right to stop others from having the same rights as we have simply because of their religious beliefs.

We don't HAVE to agree with everyone else, and we are free to believe they are wrong or that their religion in general is wrong. And thanks to the clause about Freedom of Speech we even have the right to make our standing known... However, what we are NOT free to do is to try and force our beliefs on others or try and force them to conform to what we believe they should believe or do - Even when we don't understand or agree with their beliefs!

Because the drama surrounding the Muslim Community Center is what inspired this post, and because it's currently on the minds of many, I am going to use this as my example. Because of the actions of a group of Terrorists and because of the general misunderstandings and propaganda people choose to believe surrounding Islam and those of the Muslim faith, the simple building of a Community Center has become headline news.

Thousands of Americans have come out against the building of this Center solely because of the religious affiliation of those creating it. A few of these Americans have even gone so far as to involve legal authorities and create legal red tape for the group in general. However, because of the laws in place today, these actions MUST be seen as discrimination and MUST be shot down! It would be unconstitutional and illegal to stop ANY religious group from building a Center - for worship or for other purposes - simply because of their religious beliefs.

Personally, I don't understand the drama around this issue, mostly because I am someone to does her best to find out the FACTS before I jump on to either end of an argument. But also because, even if I didn't do my best to find the facts before making judgment, I am a FIRM believer in FREEDOM! I understand that I don't have to like something or someone, but that my beliefs shouldn't in any way impede on anothers rights.

As a Pagan, religious freedom is a HUGE deal for me. Because it is this freedom which allows me to have the life I want, to educate others and myself, to have this blog, to build a website and openly state "I am a Pagan!" Without that freedom, my rights can be removed at ANY time, and if you simply take a moment to look around the world, look through our history books you'll notice that Pagan's rights tend to be the FIRST to go. And personally, I don't want to do anything that aids in the removal or revocation of my rights.

Now, how could standing up against something like a Muslim Community Center aid to the removal of our rights as Pagans? Simple. Every action taken against ANY religious community adds to the erosion of those rights in the public eye. And once we start to allow those lines in the sand to be drawn, once we allow ourselves to see other religions as less deserving we are opening the doors for others to do the same to us. Which opens the door for the majority rule to take over - once again. This is NOT something we can allow...

I want to end this post by asking each of you what you see as more important? The FREEDOM which we are lucky enough to be blessed with, or the removal of that freedom from another group...  In the end there can only be ONE answer - In order to preserve OUR freedom, we MUST stand firmly on the side of Freedom and Civil Rights, regardless of our feelings toward ANY religious group which may be involved! To take any other action not only shows our lack of gratefulness of those Freedoms which we all take for granted, but also erode our right to have them!