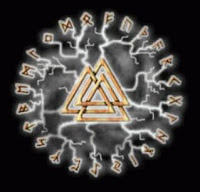 Paganism is made up of any number of individual paths, however, the majority of them are based in one of three major teachings... Wicca, is by far the most well known of these three paths, but it's not the one and only. Asatru and Druid Paths are quickly growing in followers. As with any Pagan religion there are those who are "hard core" followers and those who are more eclectic with their beliefs.

The religion of Asatru is based on the ancient practices and beliefs of the Vikings and of other Germanic Groups from Scandinavia, Denmark and Germany. Asatruar beliefs are re-constructionist, since they are drawn from surviving historical documents and archaeological evidence. The modern Asatruar acknowledge that their faith is not an exact replica of the ancient ways. It is generally recognized that the some of the old practices are not appropriate or applicable in modern life.

Most of the beliefs and practices of the Asatruar are based on a thirteenth-century collection of Norse poems known as the Eddas. These ancient poems provide both religious and magickal guidance. Some of the Eddas are stories while others are closer to proverbs.

The Eddas contain both wisdom and advice on how to live a good life and interpret the runes. The legends of the gods and heroes help the Asatruar to understand their deities and provide a framework for appropriate methods of worship. The Eddas also aid Asatruar in connecting with the ancient faith they are rebuilding by detailing the Norse worldvies from the creation to the destruction of the world.

The Eddas come in two styles, Poetic and Prose. The Poetic Edda recounts the myths surrounding the Norse gods and heroes. The Prose Edda also recounts myths but also provides instructions on writing Norse poetry. The Prose Edda dates to around 1220c.e. and is known to have been written by Snorri Sturluson. It is not currently known precisely when the poems within the Poetic Eddas were composed or by whom. However scholars believe that most were composed some time around the ninth century or as late as the twelfth. Norse traditions were originally oral. So we can not accurately gage the age or origin of most of the stories contained in the Eddas. However it is thought that most of them were composed in Iceland, if not originated there.

The Gods & Other Spirits

Basically there are two races of Gods in the Norse Pantheon. The  AEsir and the Vanir. The AEsir are related more strongly to battle and intellectual or spiritual pursuits while the Vanir are more closely connected to nature, prosperity and human emotion. According to the Eddas the two were once enemies, but have since made peace.

Asatruar worship the various deities, but do not bow to them as with more common religions. Instead, the gods are approached with love and respect in order that the Asatruar may learn to live and work with them. The relationship is closer to teacher and pupil than to master and servant.

Asatruar also work with and honor other spirits in addition to the gods. These spirits are neither divine not human. These figures are menitioned in the Eddas, and are also reflected in the myths of other cultures. They include the Norns, Valkyries, Disir and Land Spirits.

It's not known how many Asatruar there are. Like other Pagan Paths there has been much rapid growth. Asatru is especially popular in Iceland, Scandinavia and in some parts of Germany.  Asatruar are also scattered through the US and Canada, however due to the independent nature of the faith, most practice alone. By looking at the number of smaller groups that have registered, a good guess would be that there is at least a few thousand Asatru in the US and many more in Canada.