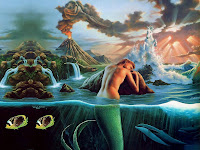 Like with the majority of other "monstrous" beings Merfolk have been largely generalized by Hollywood and the Media, although unlike other creatures this actually tends to work WITH the sightings and reports rather than against them. And like most of the beings of this type, Merfolk, have been the subject of some very questionable claims on the part of would be de-bunkers...

For well over a century now, the standard scientific explanation for a mermaid sighting throughout the world in numerous books and articles has been that the manatee has been seen and mistaken for a mermaid... To this I say, there are few better explanations with explain nothing! Manatees, for those who don't know, have far more in common with a walrus than with a Mermaid. Anyone who could possibly mistake one of these blubbery, whiskered creatures for a Mermaid was either very drunk or very dead - possibly both. And this explanation doesn't come anywhere close to explaining the stories or sightings of a Mermaid climbing atop of rocks near the shore or singing - two of the most common things Mermaids are consistently reported to be doing...

The second major issue with this explanation is basic geography.  While Dugongs (one species of Manatee) are found in shallow waters along the coast of the Indian Ocean, and Manatees are generally found through the Gulf of Mexico and the Congo River, neither of these species are found in the waters of the North Atlantic, where the majority of Mermaid sightings come in from.

In addition, you may be surprised that mermaids, along with most other "imaginary" or "monserous" beings have been sighted through the years more than numerous times by credible and sober observers who are familiar with the sea and it's inhabitants! A simple review of the reports thoughout history brings up quite a few examples.

For example, on October 29, 1811, John McIssacs gave sworn testimony that he had seen a Mermaid while walking along the beach near Campbeltown, Scotland. He was able to give a detailed description of the mermaid, who had red hair, white skin above the waist and reddish-gray below the waist, and who was sitting on a rock above the water. Two separate clergymen testified that McIssac was considered to be a sober steady man and should be considered a "reliable witness." Three days after McIssac's testimony the Sheriff-Sub at the time also took testimony from another witness, Katherine Loynachan, who had also seen an identically described Mermaid sunning on the rocks in the same area just a week before.

Sightings such as these are repeated over and over through history. In 1809, William Munro, a school teacher from Thurso in Caithness, reported seeing a Mermaid on a rock near Sandside Head. In 1814, two fisherman off Port Gordon encountered two, merman and a mermaid. In 1949, fisherman off the coast of Cape More reported seeing merfolk several times... The list only goes on and on from there.

By all accounts, merfolk live in the sea with no need to return to land, but they do seem to be able to spend short periods out of the water. The great majority of these accounts in modern sightings show the merfolk to have a standard fishtail with fins extending from side to side, like those of dolphins, whales and other marine mammals. However, there is a significant minority of these sightings which state that merfolk look exactly like humans, but live in the sea.

One theme common among the lore surrounding merfolk is the connection between them and storms. Many accounts credit them with either causing or predicting storms by singing. Through out the Middle Ages it seems there was quite the heated debate among scholars debating whether Mermaids actually had the power to raise storms or whether their singing before a storm was simply a result of their keen perception of the weather. Of course, this debate was never settled conclusively, but common belief of North Atlantic mariners was that if any member of the crew heard a mermaid singing, it was time to get in to port as soon as possible...

While there ARE legends which speak of sexual relations between humans and merfolk, the vast majority of human interactions with them tend to be brief and at a distance. As "monstrous" beings go, Mermaids are fairly harmless. But there are a few risks to dealing with the according to folklore. For example, in Hebrides, local mermen have a nasty reputation as ship-wreckers. This reputation, and similar accounts, seem to stem from a history of a soured relationship between humans and merfolk rather than to credible accounts.

One phenomenon that is found in SOME sources and not in others tends to come under some dispute. This is the belief that sailors, upon hearing a mermaid's song, would throw themselves in to the sea. While there is good reason to believe that this detail entered in to the lore by way of confusion over the myths surrounding merfolk and sirens, there does seem to be some reason to find credibility in this...  In 1973, after a number of cases like this, captains of the fishing fleet working seas south of Spitzbergen brought in an English exorcist to the area to banish the entities responsible. That stated, there is no reason to think these cases are linked to Mermaids over another unknown reason.

It also seems that trying to harm a Mermaid or Merman can be a very dangerous habit! Violence against Mermaids is said to bring on a storm of terrible intensity, strong enough to sink ships and seaside buildings.  Olaus Magnus, a Norwegian historian, speaking of Merfolk stated as follows:


Yea, this I adde from the faithful assertions of the Norway fishers, that when such [merfolk] are taken, if they be not presently let go again, there ariseth such a fierce tempest that a man would thinke the varie heavens were falling, and the vaulted roofe of the world running to ruine; in so much that the fisherman have much ado to escape with their lives; whereupon they confirmed it as a law amongst them that if any chanced to hang such a fish upon his hook he should suddenly cut the line and let him go (Benwell and Waugh, p98)

The Mermaid in History

In terms of their impact on human culture and life, Mermaids have never been the most important "monstrous" beings.  However, figures of the classic mermaid type can be found from very ancient times, often as Goddesses or other "divine" beings. In Syria the moon Goddess Derceto and the Greek tritons and tritonids are great examples of this. As with both of these examples the appearances in art tend to show with the classic mermaid fishtail. So does, Ea, Lord of Time and Measurer of the Great Deep, who is one of the mightiest Gods of Ancient Babylon.

By the Middle Ages, Merfolk have been knocked down a few pegs, but still had an important place in the bestiaries and natural histories of the time. Religious Authorities and Monkish writers tended to demonize them, as they did just about anything which was connected to women... They also managed to confuse Mermaids with the Greek Sirens.

Ireland tended to have a much more tolerant view of Mermaids. Irish annals record that in 558 a mermaid was drawn ashore in a fisherman's net, was baptized and then died. Afterward she was honored as a holy virgin and miracles were recorded at her shrine at Teo-da-Beoc.  Saint Patrick supposedly converted another member of the Irish Merfolk. Fintan, was supposedly of the tailless variety and is said to have later become an important saint in his own right.

Beyond the limits of Ireland, the mermaid seems to have dropped from divine status by Mid- Middle Ages. It seems that by the Thirteenth century the former goddess had become little more than an oddly shaped fish... Bartholomaeus Anglicus, a writer during this time, describes them as "sea beasts wonderfully shapen" and "fishes of the sea in likeness to women." During this same time however, is the period in history where detailed, circumstantial accounts of merfolk become most common.

Documented sightings continued through the Renaissance up to the early parts of the Modern day...  The North Atlantic in particular was the scene of great numbers of reports. Dispite the increasing ridicule heaped on those who claimed to see Merfolk and other "imaginary creatures," sightings continued without break in to the nineteenth century.  Throughout the 19th and 20th centuries it was Scotland in particular where the majority of these highly credible accounts come from.

So the question may come to mind of "Why did these sightings become so few and far between soon after the end of the 19th century if there were so many then?" And in fact the answer if fairly simple. During the end of the 19th century and early 20th a great many advances in technology came about. One of the greatest impacts on the world of the sea was the propeller driven ship. As the number of propeller driven ships grew, the number of Merfolk sightings dropped off drastically. With a basic level of thinking this makes more than perfect sense. Seeing how most other marine creatures do their best to avoid the noise, the pollution and the dangerously sharp, fast spinning propellers of modern vessels.

However, even with this advancement and the modern "knowledge" that merfolk are fictional these sightings have continued throughout the second half of the 20th century and in to present day. In addition to those people who do come forward, it makes sense that in today's world more people are simply not coming forward today than they did in the past given the current climate of opinion surrounding the belief in such things.

It's worth noting that there are many mis-identifications and hoaxes when dealing with Merfolk. While it's unfortunate that people would choose to seek poblicity through lies, we all know it happens. Cases such as the "feegee" mermaid have become more famous than the more credible cases.  Not ALL of these mis-identifications are hoaxes however. There are two other basic sources of mis-identification. These are Seals and Other Aquatic Mammals and regular human swimmers.

While it's hard to credit the great many claims of Mermaids from Seamen and seaside inhabitants as being seals or other normal aquatic animals, as they obviously know what these animals look and sound like. That said, it's worth noting that it HAS happened, especially when a person is not familiar with seals or similar creatures, and when these sightings happen after dark.

Now, obviously the most likely source of mis-identifications is just that... People seeing actual human beings swimming in coastal waters. Because some merfolk are said to be identical to regular humans, it's not always possible to rule out humans over merfolk. On the other hand, when a tail is seen it's less likely to be a normal person and more likely that this sighting is credible. There are, however, cases where hoaxers and other actual swimmers are wearing tails similar to those credited to merfolk.

For crypto-zoologists there is little question of the reality of Merfolk as living creatures. But the general scientific belief is that these creatures are fictional and sightings are either hoaxes or mis-identification of known creatures. For the general population they are a beautiful part of children's stories and movies, but they are far from a reality, but for many of us, the hope and belief that they do exist and will be discovered at some point is a matter of faith.

And for at least one Israeli, town it's now become a matter of money!  A number of sightings of alleged Mermaids in Israel have forced at least one town's council to get involved, offering a $1m reward to anyone who can prove that the mythical nautical nymphs exist in its waters.